Blood. Fire. Passion. Ruby is the essence of red. For most of recorded history, ruby has also been the most valuable gemstone.

In the ancient language of Sanskrit, ruby is called ratnaraj, or "king of precious stones."

Named from the Latin word for its hue, ruber, ruby is all drama. The meaning of ruby is desire, passion, courage, and emotion. Ruby is associated with the sun, ruling all the other gems, which are planets orbiting around it.

Ruby also is associated with blood, war, courage and life. It seems appropriate that ruby is the birthstone for July, the hottest month of summer. Ruby is also the gemstone of the 15th and 40th anniversaries.

The History of Ruby

Ancient cultures believed that an undying flame burned inside each ruby. Chinese legends say that rubies shine through clothing so they can never be hidden. Ancient Greeks said that ruby could boil water. Burmese warriors wore rubies next to their skin to make them invincible in battle.

In the Bible, only wisdom and virtuous women are "more precious than rubies.”

Early in the eleventh century, Persian sage al-Biruni was only conveying the popular wisdom of the time when he wrote that ruby has "the first place in color, beauty and rank" among all gems.

Even today, the finest rubies above five carats sell for more than the same size D-Flawless diamonds. Fine large rubies have actually sold for more than $1 million per carat at auction, including the Sunrise Ruby, a 25.59 carat unheated Burmese ruby that sold for $30.3 million at Sotheby’s in 2015.

Ancient people classified gems according to their colors rather than their mineral composition. Many famous rubies in the past are actually other red gemstones, usually red spinel. Spinels were called “Balas rubies” because they looked a bit different in color.

Ruby’s closest gem relative isn't spinel but sapphire. Ruby and sapphire are both varieties of the mineral corundum, with the only difference the trace minerals that give them color. Every color of corundum except red is called sapphire. What about pink? The line between ruby and pink sapphire has shifted over the years and many people think that pink rubies make more sense than pink sapphires. But today, gem laboratories still identify all but the most intense shades of pink corumdum as pink sapphire rather than ruby.

Here are some of our favorite ruby gemstone engagement rings!

Where Rubies are Mined

The most famous source for ruby in all of recorded history has been Burma, also known as Myanmar. Burmese rubies have an intense saturated red color. The mines at Mogok have been producing rubies for centuries.

Because Burmese rubies are considered the best, they sell for more than rubies mined in other places. Of course even the best mines produce low-quality material. Where a ruby comes from is no guarantee of value or quality. But fine quality Burmese rubies command a premium if they have an origin report from an independent gemological laboratory like GIA, SSEF or Gubelin, command a premium.

Today most fine ruby on the market is mined in Mozambique, which produces many rubies with a fine red color. Other important ruby producing countries include Vietnam, Sri Lanka, Malawi, Afghanistan, Kenya, Tanzania, Madagascar, Thailand and Cambodia.

Why We Love Ruby

Fine ruby is even more intensely red in sunlight. It has red fluorescence which is activated by the ultraviolet light in sunbeams, making its color glow red on red.

If you love shoes as much as we do, how could you not fall in love with the magical ruby slippers in the Wizard of Oz? To celebrate the 50th anniversary of the movie, Harry Winston created real ruby slippers set with 4,600 rubies weighing 1,350 carats: the most expensive shoes of all time.

Ruby is the perfect gem for active people who love jewelry because it’s one of the most durable gemstones. It’s corundum, with a hardness of 9 on the Mohs scale, second only to diamond’s 10. Ruby is also tough. In fact it’s even tougher than diamond, resisting chips and damage. The mineral corundum is used as an abrasive to cut other gemstones.

Since ruby’s meaning is undying passion, it makes an incredibly romantic engagement ring. We especially love the ruby engagement ring that Orlando Bloom gave to Katy Perry because its flower design is also a play on his name. Isn’t that sweet?

If you don't like faceted gemstones, ruby is also dramatic when cut in a smooth domed cabochon shape like a raspberry jelly bean. Some cabochon rubies, known as star rubies, will display a phenomenon known as asterism, a six-legged star that moves across the dome of the cabochon with the light.

How to Buy Ruby

Color is the most important factor in the value of a ruby. The finest rubies are a saturated pure red. The traditional term for the reddest ruby is pigeon’s blood red. You could also call it fire engine red or flame red. It has a slightly bluish cast that gives it pinkish reflections. Ruby with more vivid red is more expensive than rubies that have dark burgundy or brown overtones.

At RockHer, we’ve matched our preferred ruby colors to Pantone’s system as a buying guide to communicate the bright red of their hue. Which red is your favorite?

You should expect ruby to have some inclusions. If they affect transparency or brilliance they reduce a ruby’s value. Because the red hue of ruby is so strong, inclusions and haziness don’t distract the eye as much as they would in a colorless gem and so don’t affect the value as much. Avoid any inclusions that distract your eye but don't worry about examining a ruby’s clarity under magnification like you would a diamond.

Look for a lively sparkling cut that sparkles evenly across the entire ruby with no dull, washed out, or lifeless areas. Your ruby should be cut for brilliance not to maximize carat weight.

You’re more likely to see rubies cut in oval shapes and cushion cuts. These two shapes are the most suited to the shape of the rough. Of course small rubies will be cut in the round brilliant shape and are beautiful in eternity bands and also as accent gems. Other fancy shapes will be much more difficult to find in larger carat weights.

Rubies are commonly heating them to 2000 degrees to improve their clarity and color. You should assume that your ruby has been heat treated unless you have an independent lab report from GIA, SSEF or Gubelin that says there is no evidence of heat treatment.

GIA and other labs don’t grade rubies. Gemological Identification Reports assess the characteristics of a mounted or loose ruby (weight, measurements, shape, cutting style and color), say whether it is natural or lab grown, indicate any detectable treatments, and give an opinion on geographic origin, when it is possible to confirm it by looking at the ruby’s inclusions.

Some rubies on the market are treated in a process called glass filling. In this ruby treatment, a red mineral glass is infused into the fractures of an included gemstone to improve its color and clarity. Over time, the glass can chip and scratch.

If you see rubies with vivid color that are surprisingly affordable they are probably glass filled. Jewelers should disclose this treatment to you in writing on your invoice. Glass filling can be detected by a gemologist. A report from an independent laboratory like GIA can confirm that the ruby you are buying is natural and tells you whether there is evidence of treatment. At RockHer, we don't sell glass-filled rubies because they don't hold their value.

Rubies were first grown in a laboratory in the 1920s. These Verneuil synthetic rubies were first used as the jewels of mechanical watches but were later set into jewelry. That means even antique and vintage ruby jewelry may be set with inexpensive lab-grown rubies. Exercise caution when buying ruby jewelry on the secondary market.

How to Care for Ruby

Ruby has a hardness of 9 on the Mohs scale and is also extremely tough so it’s excellent for rings you wear every day. It’s more durable than its precious metal setting, which can be damaged by chemicals or contact with other metal, like weights or machines at the gym. Avoid wearing any rings at the beach or in the pool where they can slip off and be lost.

Clean ruby jewelry with mild dish soap: use a soft brush behind the stone where dust can collect. Using ultrasonic cleaners is also safe for ruby jewelry.

Ruby vs Red Spinel vs Rubellite Tourmaline vs Garnet

The red gem most similar to ruby is red spinel. This gem is so similar to ruby in appearance that many of the famous “rubies” in the collections of crown jewels and museums are, in fact, red spinel. The famous Black Prince’s Ruby in the British Crown Jewels, worn by kings and queens since 1300, is actually a red spinel. Spinel is mined in many of the same places as ruby too. But spinel is more rare than ruby, particularly in a true red: most spinel is more pink than ruby. It isn't significantly less expensive than ruby in common sizes but it is more likely to have fewer inclusions. Rubellite tourmaline is another red gem alternative to ruby. It’s generally more pink than red with dark reflections. It’s more available in larger sizes than ruby making it a good choice for statement jewelry. Pyrope garnet has an intense red in small sizes but becomes dark in larger sizes. Rhodolite garnet, which has a pinkish to purplish red, is the most affordable reddish gemstone.

Our customers’ favorite setting for ruby engagement rings is a halo setting with diamonds that encircle the center stone similar to Kate Middleton’s ring. The brilliance of the diamonds helps to light up and attract attention to the center ruby. Also popular is a simple ruby solitaire with a delicate pave band. Rubies are a perfect choice for a three-stone ring, either in the center or on the sides. Most of our customers prefer engagement rings with rubies in one to two carat sizes. In addition to rings, ruby stud earrings, ruby eternity rings and ruby wedding rings are other great ways to add some drama and passion to everything you wear.

You’d be surprised how far your money can go shopping for a ruby engagement ring. Here are our picks for gorgeous ruby rings in popular carat weights to fit some common engagement ring budgets. 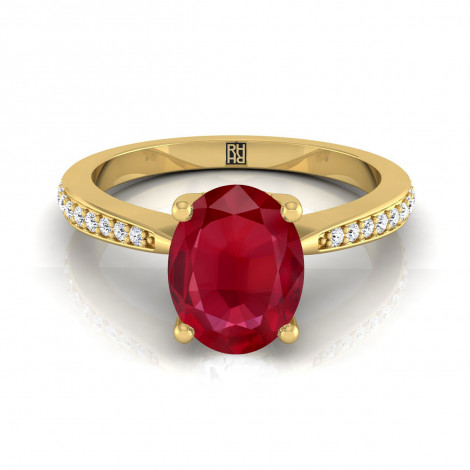 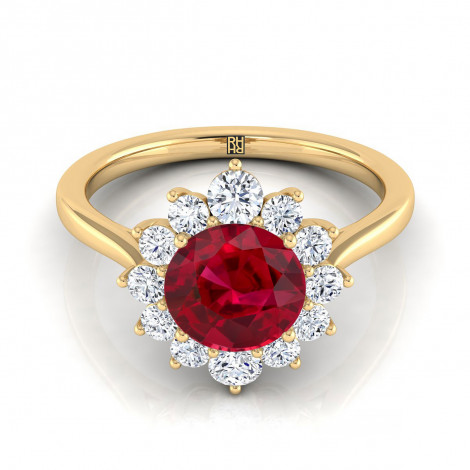