From sapphire skies to sapphire seas, one gemstone is famous for the world’s most beautiful blues. Sapphire is named after the Greek word for blue, sappheiros.

Another reason? One of the world’s most famous engagement rings of all time happens to be a blue sapphire engagement ring: the 18-carat royal blue sapphire ring that Prince Charles gave to Princess Diana and Prince William gave to Kate Middleton, now Duchess Catherine.

The History of Sapphire

Blue sapphire has long symbolized honesty, sincerity, and faithfulness. When a king wore a sapphire ring, it meant he was pledging to be a just ruler. During the Middle Ages, Cardinals and other high church officials wore blue sapphires to symbolize their vows to their faith. Blue sapphire also symbolized heaven and the reward of faith and its celestial association continues still today.

The ancient Persians believed the earth rests on a giant sapphire which colors the sky blue.

Sapphire’s association with royalty goes back at least one thousand years. The historic St Edward’s sapphire, which can be traced to Edward the Confessor in 1042, is set in the cross of the Imperial State Crown of the British Crown Jewels, along with the 104-carat royal blue Stuart Sapphire. The story goes that St Edward, King of England, met a beggar and, having no coins, gave him his sapphire ring. The beggar was St Peter in disguise, who returned the ring to the charitable king. The sapphire was later set in the crown as a symbol of the divine right of royal rule.

Sapphires are valuable so they have long been coveted by jewel thieves too. In New York, the 563-carat Star of India star sapphire, in the collection of the American Museum of Natural History was stolen in an infamous 1964 burglary carried out by Jack Murphy, AKA Murph the Surf, and two other men. The huge sapphire was recovered several months later.

Where Natural Blue Sapphires are Mined

Sapphires have been mined since 500 BC on the beautiful island once known as Ceylon, now called Sri Lanka. The island was the origin for the valuable gems given by King Solomon to the Queen of Sheba in the Old Testament. Sri Lankan sapphires are ancient Roman rings dating from the third century BC. Marco Polo visited Sri Lanka in 1292, writing about its streams filled with sapphires and other gemstones.

In 1881, blue sapphires were discovered in Kashmir at an elevation of 13,000 feet near the village Sumjam in the Himalayan mountains. Kashmir sapphires have a saturated velvety blue color with a silky clarity that seems to intensify the color. Because Kashmir sapphires from this famous deposit were only produced for a short period, they are rare. Sapphires with an independent laboratory report confirming Kashmir origin from Gubelin, SSEF, or the GIA command a premium in the market.

Another famous source for blue sapphire is Burma, also known as Myanmar. Burmese sapphire is generally cleaner and darker in tone. Burma is famous for producing the best rubies and its sapphires too command a premium when origin is confirmed by an independent laboratory report.

In recent years, most fine color natural sapphires have been produced from mines in Madagascar. Blue sapphire is also produced in Montana in the United States as well as Australia, Cambodia, Tanzania, and Thailand.

Sapphire is the September birthstone and the 5th and 45th anniversary gem.

Here are some of our favorite sapphire gemstone engagement rings!

Why We Love Sapphire

The color of sapphire is very restful. Like gazing out at the ocean, it makes you feel more peaceful and serene. Is blue your favorite color? You aren’t alone: blue is the most popular color worldwide. That’s why so many people love sapphire.

Sapphire is also one of the most durable gemstones: it’s corundum, with a hardness of 9 on the Mohs scale, second only to diamond’s 10. Sapphire is also tough. In fact it’s even tougher than diamond, resisting chips and damage. Sapphire is so tough that lab-grown sapphire is used for supermarket scanners, spacecraft windows, and watch crystals.

We also love how natural sapphires aren’t as common as diamonds. Choosing a blue sapphire engagement ring instead of a diamond engagement ring sets you apart from the crowd. Every sapphire has a unique personality.

In fact, if you aren’t in love with faceted blue sapphire, you have other natural sapphire options available. All the rainbow colors of corundum are sapphires except red corundum, which is ruby. Sapphires in colors other than blue are known as fancy sapphires. Sweet pastel or vibrant pink sapphire is almost as popular as blue. These feminine rosy sapphires are a good alternative to pink diamonds at a more affordable price. The rarest color of sapphire is pinkish-orange padparadscha sapphire, with the color of the Sri Lankan sacred lotus blossoms that gave padparascha its unusual name. Yellow sapphire has a golden hue that’s like sunshine. You can also choose white sapphire as a beautiful natural diamond alternative.

And blue sapphire is also lovely cut in a smooth domed cabochon shape instead of being faceted. Some cabochon sapphires, known as star sapphires, will display a phenomenon known as asterism, a six-legged star that moves across the dome of the cabochon with the light.

How to Buy Blue Sapphire

The most important thing to consider when buying a sapphire is its color. Sapphire with more vivid blue is more expensive than sapphires that are a watery or blackish blue. The most valuable blue sapphire hue is a rich and saturated medium dark blue. This is sometimes called “cornflower blue,” after the bright blue flower.

Some people assume that the darker a sapphire’s color, the better, but that’s actually not the case. Blue sapphire can be too dark, with a midnight blue that’s almost black. You’ll see these midnight blue sapphires that are almost opaque in chain jewelers. These gemstones are less valuable than a rich medium royal blue color.

At RockHer, we’ve matched our preferred sapphire colors to Pantone’s system as a buying guide to communicate the rich blue of their hue. Which blue is your favorite?


Because the blue hue of sapphire is so strong, inclusions and haziness don’t distract the eye as much as they would in a colorless gem and so don’t affect the value as much. Avoid any inclusions that distract your eye but don't worry about examining a sapphire’s clarity under magnification like you would a diamond.

Look for a lively sparkling cut that sparkles evenly across the entire sapphire with no dull, washed out, or lifeless areas. Your sapphire should be cut for brilliance not to maximize carat weight.

You’re more likely to see oval shape sapphires and cushion cut sapphires. These two shapes are the most suited to the shape of the rough. Of course small sapphires will be cut in the round brilliant shape and are beautiful in eternity bands and also as accent gems. Other fancy shapes will be a bit more difficult to find in larger carat weights.

Some sapphires on the market are treated in a process called diffusion. Diffusion treated sapphires have titanium and other coloring elements added in a surface layer when the sapphire is heated to create a rind of color around the outside of the gem. This layer can be very shallow like a coating so these stones can’t be repolished or recut. As a result, they are much less expensive. If you see sapphires with vivid color that are surprisingly affordable they are probably diffusion treated. Jewelers should disclose this treatment to you in writing on your invoice. At RockHer, we don't sell diffusion treated sapphire because they don't hold their value.

How to Care for Blue Sapphire

Sapphire has a hardness of 9 on the Mohs scale and is also extremely tough. Sapphire dust is even used to cut and polish other gemstones. That shows that sapphires are the most durable of gems.

Sapphire is excellent for rings you wear every day. It’s more durable than its precious metal setting, which can be damaged by chemicals or contact with other metal, like weights or machines at the gym. Avoid wearing any rings at the beach or in the pool where they can slip off and be lost.

The blue gem most similar to sapphire is tanzanite, a blue zoisite gem found only in Tanzania. Tanzanite has sapphire’s blue shade but also often has reflections in a purplish hue thanks to the optical phenomenon called pleochroism. Tanzanite is less durable than sapphire with a Mohs hardness of 6-6.5 compared to sapphire’s 9. Tanzanite needs a protective setting if worn in a ring everyday. Tanzanite is more affordable than sapphire of the same color and quality and is available in larger carat weights.

Our customers’ favorite setting for sapphire engagement rings is a halo setting with diamonds that encircle the center stone similar to Kate Middleton’s ring. The brilliance of the diamonds helps to light up and attract attention to the center sapphire. Also popular is a simple sapphire solitaire with a delicate pave band. Sapphires are a perfect choice for a three-stone ring, either in the center or on the sides. Most of our customers prefer engagement rings with sapphires in one to two carat sizes. In addition to rings, sapphire stud earrings, sapphire eternity rings and sapphire wedding rings are other great ways to add some true blue symbolism to everything you wear.

You’d be surprised how far your money can go shopping for a sapphire engagement ring. Here are our picks for gorgeous sapphire rings in popular carat weights to fit some common engagement ring budgets. 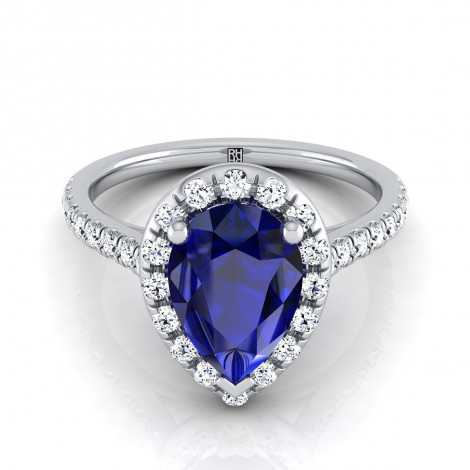 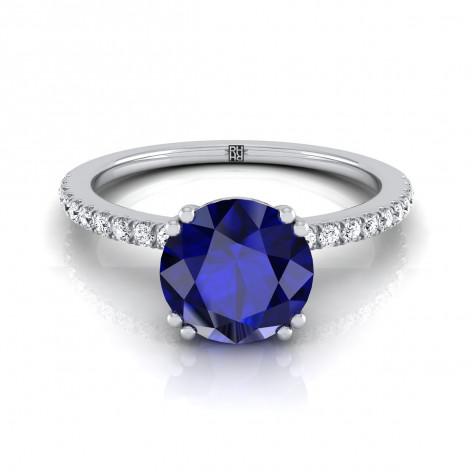 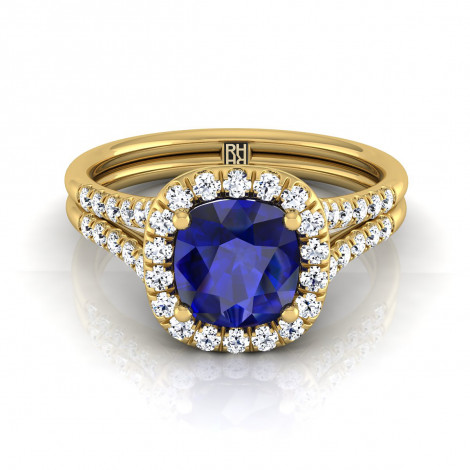