On the beautiful island of Hawaii, land born in the fire of volcanoes, there’s a special green beach called Papakolea, with a glamorous past. The entire beach sparkles with gemstone sand: it’s made of tiny grains of peridot.

Peridot is the gem variety of the mineral olivine. The yellow-green gemstone is always born in fire. Peridot is formed deep within the earth under tremendous heat and pressure. Peridotite, the peridot-rich rock that forms much of the earth’s upper mantle, is named after it.

Peridot crystallizes in volcanic pipes and is even found in meteorites, remnants of the cores of ancient broken planets. The story of peridot stretches back to the formation of our solar system, longer than earth itself existed. In 2005, peridot was found in comet dust brought back from the Stardust probe. A few samples of extraterrestrial peridot from the meteorites called Pallasites have even been faceted into gems.

The History and Meaning of Peridot

The word peridot comes from the Arabic “faridat,” which means “gem.”

A deserted island in the Red Sea off the coast of Egypt is the original source for the ancient world’s gem-quality peridot. The island, now known as Zabargad, was called Topazios and the peridot was originally called topaz, when gems were named by color not gemology.

Egypt’s peridot was mined as far back as at least 300 BC. In the first century BC, author Diodorus Siculus wrote that the Egyptians kept the island under constant guard and anyone who tried to approach it without permission was threatened with death. The site of the ancient mine was discovered by archeologists in 2010, including about 150 surface pits, peridot fragments, ruins of dwellings, a well, and broken pieces of pottery.

The Romans called peridot "evening emerald," since its green color did not darken at night but was still visible by lamplight.

Peridot was once thought to contain rays of sunshine. The meaning of peridot is related to the sun: peridot prevents nightmares, gives you strength, protects against evil, and warms the heart.

In the Middle Ages, Peridot was used to decorate medieval churches, probably carried back to Europe by the Crusaders. For centuries, people believed that three 200-carat green gems in the treasury of Germany’s Cologne Cathedral were emeralds. They are, in fact, peridot.

Peridot is treasured in Hawaii as the goddess Pele's tears. Pele is the volcano goddess of the volcano, dangerous, powerful and beautiful: “she-who-shapes-the-sacred-land.” Lava destroys structures and vegetation but also creates new land. Pele’s gift of peridot is said to heal and to bring wealth and growth.

Here are some of our favorite peridot gemstone engagement rings!

Where Peridot is Mined

Although Hawaii’s volcanoes have produced some peridot large enough to be cut into gems, virtually all peridot sold in Hawaii today is from Arizona. In fact, Arizona is the most important supplier of peridot in the world.

Peridot is mined, often by hand, by Native Americans on Peridot Mesa, part of the San Carlos Apache Reservation in Arizona. Arizona peridot is beautiful in color but relatively small in size. Faceted peridot from Arizona is rare in sizes above five carats. Small peridot are also mined in China.

Fine large peridot are found in Burma, which have a beautiful grass-green color. Sometimes Burmese peridot has a hazy clarity that makes the color really glow. In 1994, a new deposit of fine peridot was discovered in Pakistan, 15,000 feet above sea level in the far west of the Himalaya Mountains. Some of the crystals are so large that they can cut faceted peridot gemstomes of 50 carats or more.

Why We Love Peridot

When you see it shining green-gold in the sun, you can see why peridot has always been associated with sunlight. Wearing what the Egyptians called the “gem of the sun” in the summer reminds us of a garden lush with new growth. Like the leaves in the garden, peridot’s lime green color complements all the colors of flowers.

We especially love the yellow green of peridot in warm yellow gold with sky blue topaz or turquoise. Peridot is like that squeeze of lime in a cocktail that brings everything together.

And isn’t it perfect that this sunny gem is the birthstone for August? Peridot is also the 15th anniversary gemstone.

How to Buy Peridot

Although the best peridot is a pure grass green, most peridot is yellowish-green. Olive green undertones lower the value of peridot.

At RockHer, we’ve matched our preferred peridot colors to Pantone’s system to communicate the range of green hues available. Which green is your favorite?

Since peridot is widely available you shouldn't have to sacrifice on clarity. Most better-quality peridot has no eye-visible inclusions, with tiny black spots—actually minute mineral crystals—visible under magnification. Other inclusions common in peridot are reflective, disk-shaped inclusions called “lily pads.” Look for eye clean peridot gemstones with no prominent inclusions.

Cut quality is very important for the beauty of peridot gemstones: a well-cut peridot will sparkle evenly across the entire gemstone with no dull, washed out, or lifeless areas. Peridot has very high double refraction. When you look at the pavilion carefully, you will see two of each facet.

How to Care for Peridot

Peridot has a Mohs hardness of 6.5, which is harder than metal but softer than many gems. Store peridot jewelry separately, especially when travelling, so gems and metal can’t scratch each other. Because peridot can sensitive to rapid changes in temperature, never have it steam cleaned and avoid ultrasonics.

To keep your rings clean, don't wear them when applying lotion or creams or using cleaning products like cleanser. Clean with mild dish soap: use a soft brush behind the stone where dust can collect.

Peridot vs Tsavorite vs Chrysoberyl

Peridot’s distinctive yellow-green color stands out in the gem world. There’s no other gem quite like it. But the finest grass green of peridot is also found in a rare brilliant green garnet called tsavorite that is found in Tanzania and Kenya. Tsavorite is more expensive per carat that peridot and rare in large sizes. But it is a much better choice for eternity bands and other jewelry that requires small brilliant gems because it is harder and has more sparkle.. (Small tsavorite in darker colors also stands in for emerald in eternity bands and pave jewelry.) The only other gem that often occurs in a similar yellow-green color is faceted chrysoberyl. This rare gem variety is better known for cats-eye gems but it can also be found in faceted gemstones with golden to apple-green hues. It will generally be more expensive than peridot but is harder and more durable.

You’d be surprised how far your money can go shopping for a peridot engagement ring. Here are our picks for gorgeous peridot rings to fit some common engagement ring budgets. 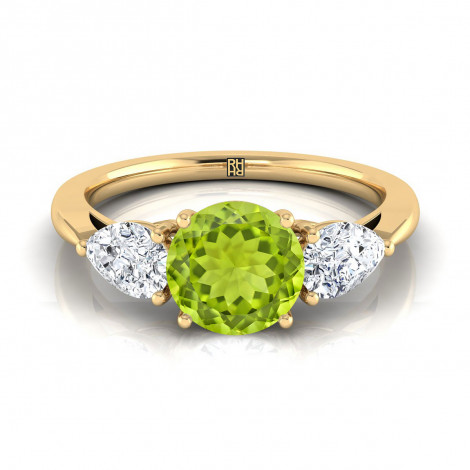 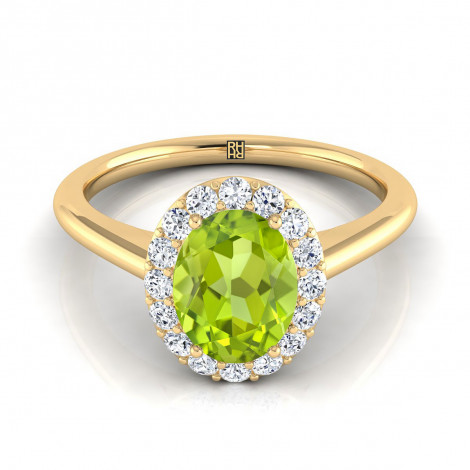 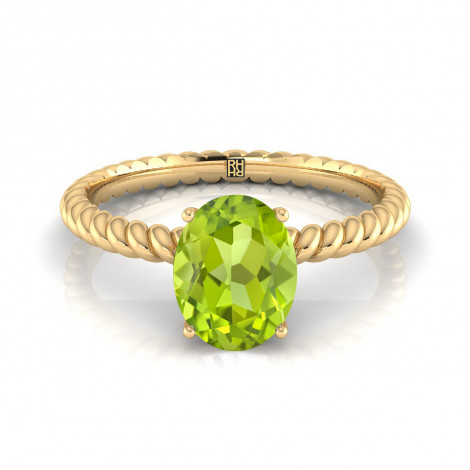