Blue topaz sparkles with the beautiful azure hue of the sky. This pastel blue gem is as affordable as it is beautiful. Its cool blue color and remarkable clarity are as refreshing as a swimming pool on a hot summer day.

Legend says that topaz dispels enchantment. The ancient Greeks believed that topaz has the power to increase strength and make its wearer invisible in times of emergency.

Blue topaz crystals are some of the largest gemstones ever found. The Brazilian Princess blue topaz, in the collection of the American Museum of Natural History in New York, is 21,005 carats!

The History of Blue Topaz

Blue was once the rarest color of topaz, but today it is the most common, thanks to a stable color enhancement process developed in the 1970s. Virtually all of the blue topaz on the market today has treated color.

The story of blue topaz is a story of alchemy. Scientists researching how color occurs in minerals discovered that natural radiation in rocks in the ground creates the color in many crystals, like zircon and green diamonds. Experiments with topaz showed that a stable blue color could be induced in colorless topaz or white topaz by irradiating it and then heating it.

Soon the new treated gem was introduced to the market. Initially, it was very expensive because it was so unusual. But over the years as the process was perfected and production grew, it became surprisingly affordable.

The colorless topaz used in the process is mined in Brazil, Sri Lanka, Nigeria, and China. The gems are usually cut before they are treated.

National regulations around the world control the release of gems and other material from irradiation facilities to ensure that it meets safety standards. In the United States, the standard for release and import of blue topaz is 0.4 nanoCuries per gram for a number of isotopes, the rough equivalent of 14.8 Bq/gram. In the EU and most other countries it is 74 Bq/gram, a small fraction of the background radiation that everyone is exposed to every day.

Natural blue topaz exists but it is rare and very pale in color. Most are found in Brazil but a few natural blue topaz gemstones were discovered in the United States in Texas. Blue topaz is now the state gem of Texas.

Here are some of our favorite blue topaz gemstone engagement rings!

Why We Love Blue Topaz

Who doesn't feel free spirited gazing into a blue sky? Blue topaz is such an optimistic gemstone, with the promise of blue sky even on a gray day.

Topaz occurs in very large crystals: faceted gems of hundreds of carats are available. Large gems in fine colors are rare but if you love big rocks, topaz is a great choice.

For jewelry designers, blue topaz is the gem of creativity. You can find this gem in so many shapes and sizes it can inspire innovative jewelry designs. You aren’t limited to the standard gemstone shapes.

Blue topaz is also beautiful in combination with other pastel gems like citrine and amethyst in colorful gemstone jewelry designs.

Blue topaz is a hard gem, with a Mohs hardness of 8, so it takes a very high polish. It’s so smooth that faceted topaz feels slightly slippery to the touch.

How to Buy Blue Topaz

Because blue topaz is enhanced to create specific hues, you can generally buy exactly the shade you prefer. The most vivid color is called Swiss Blue, a bright windex-blue color that is light but saturated. Sky blue is a paler pastel baby blue color. London blue is darker in tone.

At RockHer, we’ve matched our preferred topaz colors to Pantone’s system to communicate the range of blues available. Which blue is your favorite?


Because blue topaz is lighter in color, look for eye clean gems with no visible inclusions.

Cut quality is very important: a well-cut blue topaz will sparkle evenly across the entire gemstone with no dull, washed out, or lifeless areas.

Because blue topaz is readily available and affordable, it can be found in a wide variety of shapes and sizes, including unusual cuts. The most popular cuts are oval shapes, emerald cuts, and round brilliant cuts. Large dramatic gems are readily available.

How to Care for Blue Topaz

Blue topaz is a very hard gemstone, a hardness of 8 on the Mohs scale, but it can be split with a single blow: a trait it shares with diamond. As a result it should be protected from hard knocks. Clean with mild dish soap: use a toothbrush to scrub behind the stone where dust can collect. Ultrasonic cleaning is also safe for topaz jewelry.

There is also a synthetic amethyst that is made in labs in Russia, China, and other places. Only a few labs can separate it from natural amethyst, so use care when buying from dubious sources. GIA is one of the leading labs in the world offering this service. Since amethyst is inexpensive, very few buyers have their gems tested so trusting your jeweler is essential.

The blue gem most similar to blue topaz is aquamarine, which also has a pastel blue hue. Aquamarine is a more greenish blue color, like the ocean. Because aquamarine’s color is natural, unlike the color of blue topaz, you will see more color variation, including paler tones. In particular, small carat weight aquamarine gemstones are pale: this gemstone has more intense color in larger sizes. As a result, it’s difficult to find aquamarine eternity bands and other designs with small gems. Blue topaz is a better choice for jewelry set with a lot of very small gemstones. Blue topaz has a higher refractive index than aquamarine, so small gems will sparkle a bit more. It’s much more dense than aquamarine so a one-carat weight aquamarine will be noticeably larger than a one-carat weight blue topaz.

The most popular blue topaz engagement ring style is a diamond halo ring with a pave band. Blue topaz solitaire engagement rings are also popular, especially with a large center blue topaz gemstone. Three stone rings most often have a round brilliant or oval blue topaz in the center and pear shaped or round diamonds on the side but a wide choice of fancy shapes are available to create a unique combination. Blue topaz is complemented by all three colors of gold: white gold, yellow gold and rose gold. 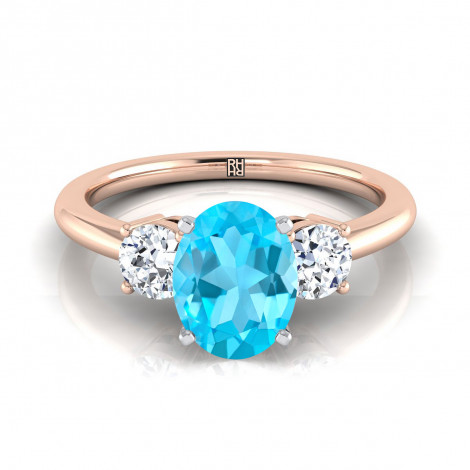 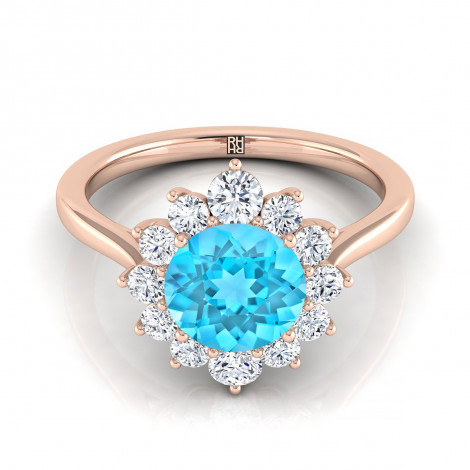