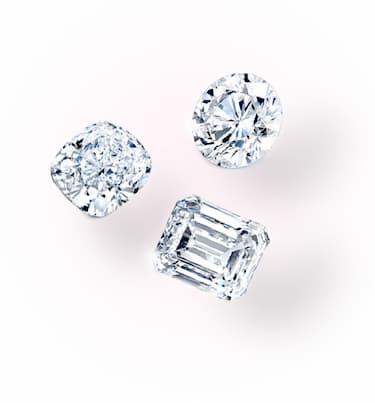 start with a lab created diamond

The new diamond age has begun. After decades of research, scientists have finally developed the technology to make fine quality diamonds in a laboratory. That means these beautiful gems are now more accessible for a wider audience.

Lab grown diamonds, which are also called created diamonds, synthetic diamonds, and man-made diamonds, are identical to natural mined diamonds except for how they form. Advanced testing is required to tell them apart from natural diamonds since they are actually diamonds, just grown in a lab instead of mined from the earth.

Are lab-grown diamonds right for you? Here is a crash course on the similarities and differences between lab grown diamonds and natural mined diamonds so you can make the right choice.

What Are Lab Grown Diamonds?

Lab grown diamonds are pure crystals of carbon, just like natural diamonds, but they are created by man. In diamond, the only gem composed of a single element, carbon atoms are bound tightly together, forming a crystal with remarkable transparency and hardness. Diamond bends light and creates brilliance and sparkle unlike any other gem.

HPHT stands for “High Pressure High Temperature.” In this process, scientists put a diamond seed inside a pressure vessel and increase the temperature and pressure until they are similar to conditions deep in the earth where diamonds crystallized naturally billions of years ago. Diamond crystallizes on the seed and in a few weeks the crystal has grown enough to cut into a polished diamond.

CVD stands for “Chemical Vapor Deposition.” In this process, scientist suspend a diamond seed inside a chamber filled with methane and hydrogen, heating the gasses until they become white-hot plasma. Carbon precipitates out of the plasma on the seed in layers, atom by atom, forming diamond. CVD-grown diamonds are the purest type of diamond chemically, Type IIa, with exceptional color and clarity. CVD-grown created diamond crystals are sometimes processed again with high pressure and high temperature after they are grown to realign the carbon atoms and lighten the color.

What are the Similarities Between Lab-Grown and Natural Diamonds?

Lab grown diamonds have the same physical, chemical, and optical properties as natural diamonds. That means they have the exact same brilliance, fire and scintillation. They look identical in every way. No one can tell just by looking at a diamond whether it is lab grown or natural.

When grading man-made diamonds, grading laboratories engrave “Lab Grown” on the girdle with a laser to make sure that consumers know that the diamond they are buying is grown in a laboratory.

Natural diamonds formed billions of years ago deep within the earth at the bottom of continents and were carried to the surface in ancient superdeep volcanoes. Most diamonds are mined by large scale mining companies in remote areas, including Canada, Russia and Botswana, employing 77,000 people around the world. With only one injury per 1,000,000 hours worked, a job in diamond mining is 15x safer than working in a retail store.
The number of diamonds mined each year peaked in 2005 and will decrease significantly over the next decade. In fact, most of the diamonds recovered today come from kimberlites discovered decades ago, which is why diamond production is gradually decreasing.
Natural diamonds hold value. They can be repurposed, resold, and passed down in families. You can have confidence that your natural diamond will be valued by your children and your children’s children. Natural diamonds are rare and valuable because the geologic forces that brought them to the surface no longer occur. For people across all generations, natural diamonds are symbols of love and also of authenticity, achievement and strength.
Lab grown diamonds form in a lab over weeks rather than deep within the earth over long periods of time. They don’t require mining but creating them does use significant amounts of energy. Some producers use solar power or hydropower to minimize their carbon footprint.

Because lab grown diamonds form under different conditions than natural diamonds, they have small differences in their crystal growth structure that can be used to separate them from natural diamonds. Laboratories have developed advanced testing equipment that uses fluorescence to analyze these growth structures to tell how a diamond formed. (At RockHer, we test every diamond we sell, even the smallest stones, to confirm origin.)

Because lab-grown diamonds are a relatively new product, it isn’t yet known whether they will hold value as the years go by. In the past decade, the value of lab grown diamonds has decreased as production has increased. Further improvement in technology could mean dramatically lower prices in the future.

Which is Right for You?

start with a lab created diamond